The ngVLA will be the ultimate black hole hunting machine, surveying from the remnants of massive stars to the supermassive black holes that lurk in the centers of galaxies. High-resolution imaging will separate low-luminosity black holes in our local Universe from background sources, providing critical constraints on their formation and growth for all sizes and mergers of black hole-black hole binaries. The ngVLA will identify the radio counterparts to transient sources discovered by gravitational wave, neutrino, and optical observatories. Its high-resolution, fast-mapping capabilities will make it the preferred instrument to pinpoint transients associated with violent phenomena such as supermassive black hole mergers and blast waves. 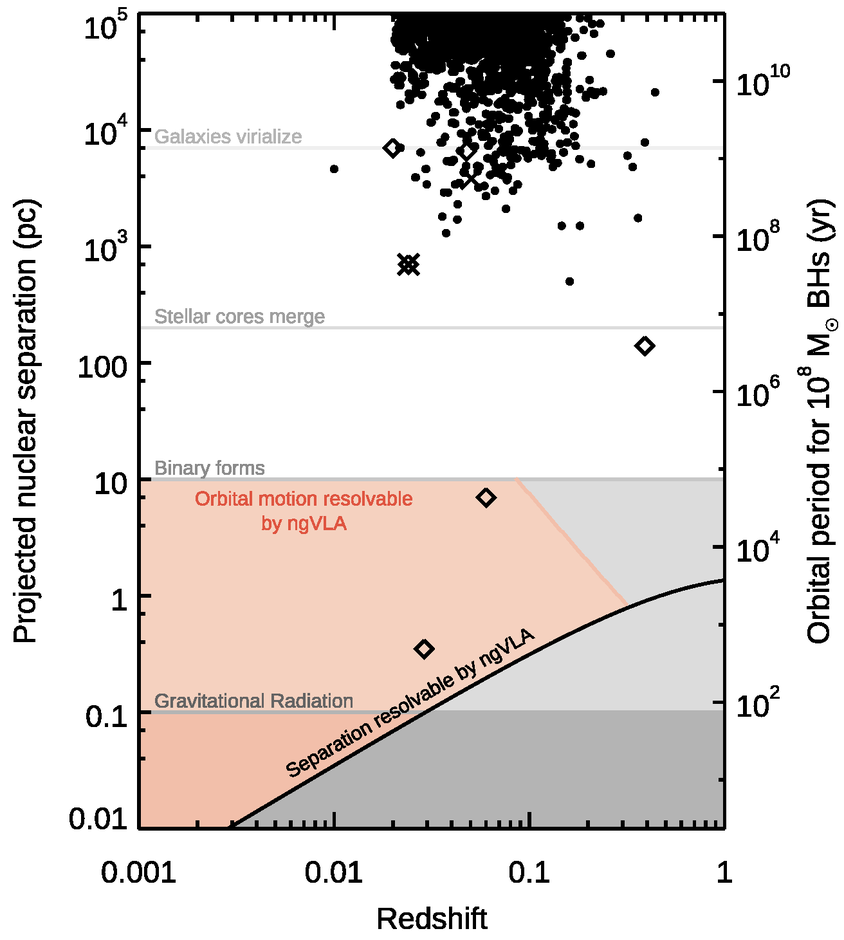 Dual AGN and black hole binaries, with optical/NIR selected sources as dots, X-ray selected sources as X’s, and radio selected sources as diamonds. The region above the solid black line will be resolved by the ngVLA, while the region shaded in orange would have measurable proper motions over 5 years if detected at signal-to-noise of 100 at 40 GHz (which for Eddington-limited AGN should be achievable in minutes with the ngVLA) for 108 solar mass black holes (from Burke-Spolaor et al. 2018). Characterizing the population of  binary compact objects is necessary to understand the frequencies of mergers and the mechanisms involved in the merging and the mass-growth of black holes. These sources are thought to be the parent population of gravitational wave events observed by current (LIGO) and future (LISA) gravitational wave observatories. To uncover these sources it is necessary to have very high sensitivity at frequencies >30 GHz and the capability of carrying out micro-arcsecond precision astrometry with transcontinental-scale baselines. The ngVLA will also be capable of performing black hole searches, obtaining high precision maser kinematics, and participating in pulsar timing arrays to perform gravitational wave detection.