Attendees at the June 2018 ngVLA Science Meeting in Portland, Oregon: Astrophysical Frontiers in the Next Decade and Beyond. 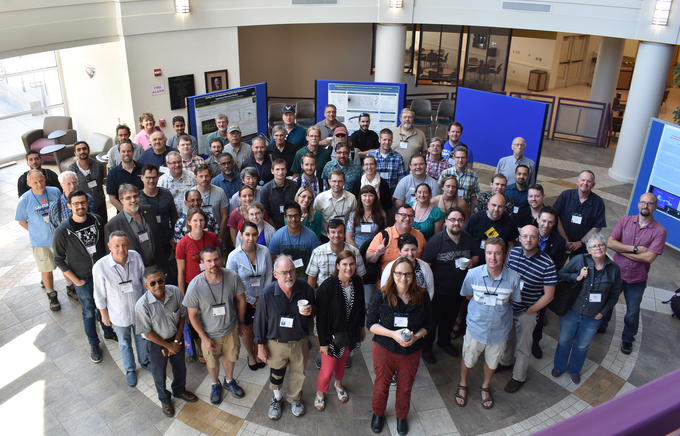 Group photograph at the June 2017 ngVLA Science and Technology meeting.

The design and development of a Next Generation Very Large Array (ngVLA) is being led by members of the astronomical community in close collaboration with the National Radio Astronomical Observatory (NRAO).  As such, scientific and technical advisory councils were established to act as interfaces between NRAO and the scientific and engineering communities.

The ngVLA Science Advisory Council (SAC), in collaboration with the larger ngVLA Science Working Groups (SWGs), have established (and are continuing to develop) a cogent science case that requires observations between 1.2 – 116 GHz with sensitivity, angular resolution, and mapping capabilities far beyond those provided by the Jansky VLA, ALMA, and the SKA. These science cases span a broad range of topics in the fields of planetary science, Galactic and extragalactic astronomy, as well as fundamental physics.

Similarly, the ngVLA Technical Advisory Council (TAC) is working on finding ways to achieve these science goals through novel engineering, while the ngVLA Project Office is building tools to help support the work of these groups.

These advisory councils act as the cornerstones of a program to fully engage the astronomical, computing, and radio engineering communities to develop the ngVLA project for submission to the Astro2020 Decadal Survey.