Pulsars in the Galactic Center represent clocks moving in the space-time potential of a super-massive black hole and would enable qualitatively new tests of theories of gravity. They offer the opportunity to constrain the history of star formation, stellar dynamics, stellar evolution, and the magneto-ionic medium in the Galactic Center. The ngVLA combination of sensitivity and frequency range will enable it to probe much deeper into the likely Galactic Center pulsar population to address fundamental questions in relativity and stellar evolution. 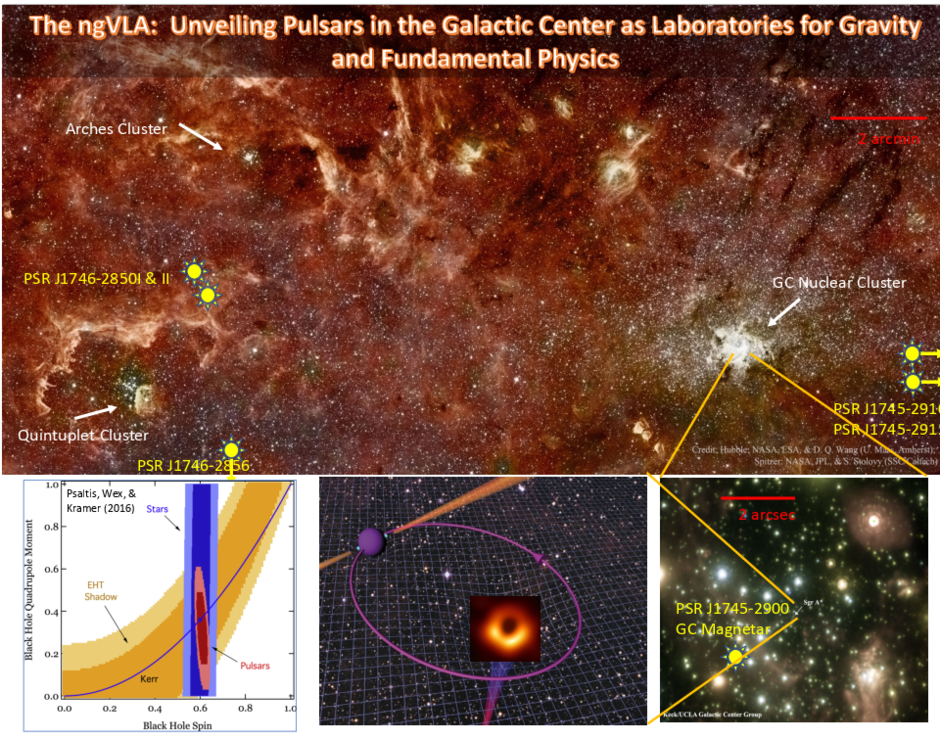 The pulsar distribution near the Galactic Center. Despite being the highest density in the Galaxy and multiple searches at sensitivities comparable to the VLA, only a few pulsars are known though ~1000 are predicted. By discovering pulsars around Sgr A*, the ngVLA will provide new opportunities to test theories of gravity to a previously impossible precision, as shown by the calculations in the lower-left panel (Psaltis et al. 2016). The key capabilities needed for this science are superb sensitivity at frequencies of 1 to 20 GHz. The main obstacle to pulsar detection is believed to be the extremely strong scattering caused by the turbulent ionized interstellar medium screen near the Galactic Center. Going to frequencies higher than the traditional 1-2 GHz reduces the scattering, but requires much higher sensitivities since most pulsars have steep spectra. Finding and timing a normal pulsar in an orbit bound to SgrA* will allow us to uniquely test General Relativity, probing the cosmic censorship conjecture and the no-hair theorem down to 0.1% and 1% precision respectively.