The ngVLA will measure the planet initial mass function to 5 – 10 Earth masses and unveil the formation of planetary systems similar to our Solar System by probing the presence of planets on orbital radii as small as 0.5 AU at a distance of 140 pc. The ngVLA will also reveal circum-planetary disks and sub-structures in the distribution of millimeter-size dust particles created by close-in planets and will measure the orbital motion of these features on monthly timescales. 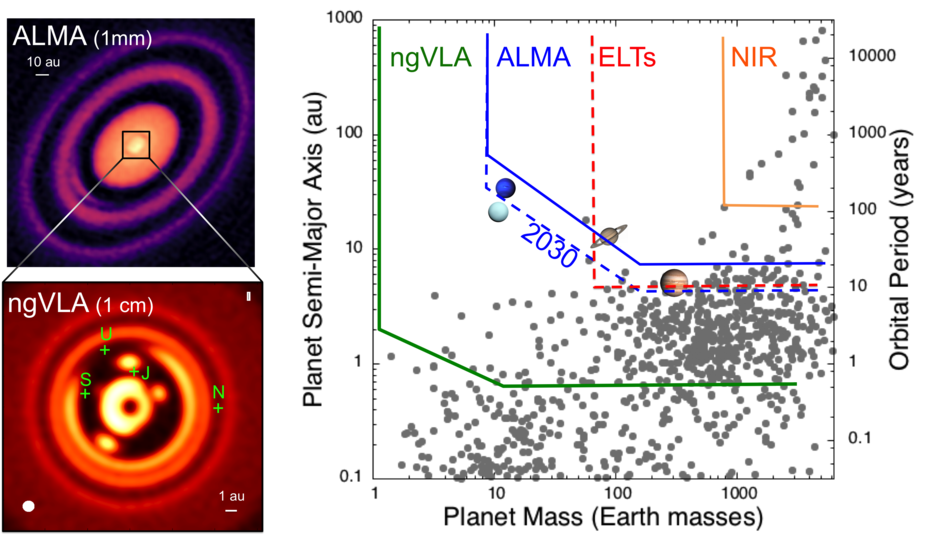 Top-left – ALMA 1mm observations of HD163296 with a resolution of 0.04” (4 au at d=101 pc) revealing gaps and rings indicative of the presence of Saturn-like planets (Liu et al. 2018; Zhang et al. 2018). Bottom-left – Simulated 1 cm ngVLA observations of the innermost 24 au region at 0.01” (1 au) resolution, assuming the presence of (J)upiter-, (S)aturn-, (U)ranus-, and (N)eptune-like planets. Right – The distribution of exoplanets around mature stars and young planets embedded in circumstellar disks probed by current NIR telescopes (orange box), future ELTs (red box), ALMA & ALMA2030 (blue boxes), and the ngVLA (green box). The ngVLA will discover many hundreds of planets with orbital periods < 10 yr, allowing for temporal monitoring and characterization of their orbital motions. The key instrument capabilities necessary for this science are superb resolution and surface brightness sensitivity at frequencies of 30 to 116 GHz to image the dust emission. The dust continuum is optically thick at frequencies of 200-400 GHz (where instruments such as ALMA have peak sensitivity) in the central regions of protoplanetary disks, where the orbital time scales are years and Earth-like planets are thought to form. By probing longer wavelengths with the necessary resolution and sensitivity the ngVLA opens up the observation of planet formation in the terrestrial region of young protoplanetary disks, otherwise impossible with any other ground or space facility. This is highly complementary to current and future efforts to understand and characterize exoplanets and their compositions.